Sleep does more for your life than replenish your energy stocks and help support the growth of new cells. Sleeping helps us relax and renew ourselves in more ways than one. But what if your sleep quality is poor, or worse, nonexistent? 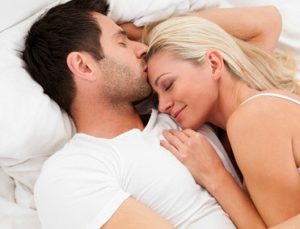 Many people suffer from debilitating sleep disorders such as insomnia, sleep apnea and even snoring. While snoring might not seem that serious an issue, imagine this: you’re minding your own business, sleeping away, when you get a sharp elbow to the ribs from your partner. Unbeknownst to you, you were snoring. You roll over and continue to sleep only to be woken up by the lack of oxygen in your lungs from someone half-smothering you with a pillow. It sounds crazy, but it happens to so many people. Snoring is disruptive not only for the snorer but also for the person who shares the bed. Great snoring solutions can make a huge difference.

This is why sleep is so important for relationships. Do you think the snorer and the sleeper can talk to each other nicely when they’ve been keeping each other up all night in one way or another? Probably not. Many relationships, romantic or otherwise, will fall apart if the sleep disturbances are not addressed.

This article shows us why:

New research discovers that when husbands and wives get more sleep than on an average night, they are more satisfied with their marriages '” at least the following day.

In the study, Florida State University psychology professor Dr. Jim McNulty and graduate student Heather Maranges hypothesize that sleep is linked to self-regulation or self-control, which influences how married couples feel and think about their partner.

'The universality of our findings is important,' Maranges said. 'That is, we know all people need sleep. Regardless of the stage at which a couple is in their relationship or the cultural context in which they're embedded, each member of the couple can be adversely affected by not getting enough sleep.'

The paper appears in the Journal of Family Psychology.

The researchers believe sleep influences self-control. Self-control requires energy that can be replenished when our bodies are in the resting period known as sleep. In other words, sleep offers self-regulatory benefits to relationships.

'Up to one-third of married or cohabiting adults report that sleep problems burden their relationship,' the researchers wrote in the paper.

Other sleep studies have indicated that even partial sleep deprivation can have harmful effects on processes that require self-regulation, like evaluating how you feel about your partner.

However, results in this study revealed that differences between couples' sleep durations was not associated with differences in marital satisfaction. Because one couple gets more sleep than another does not mean that the couple that experienced more sleep viewed their marriage more favorably.

Maranges and McNulty conducted their research with 68 newlywed couples. Over a seven-day period, couples recorded the number of hours they slept and then responded to two sets of questions on a scale of one (not satisfied at all) to seven (extremely satisfied).

If you suffer from snoring you and your partner, if you have one, are not sleeping well. Have you noticed if you’ve been snappy to each other lately? Has the snoring always been an issue, or has it recently started? There are several causes of snoring and some of them you can address and combat on your own. It all depends on how much effort you’re willing to put into getting a good night’s sleep and a sweet good morning.