For most of us who have no medical background, we don’t necessarily try to make sense of everything that is happening to us. For instance, if you snore or your partner does, then that’s simply it. You or your partner snores. Irritating as it may be and leaves you deprived of precious sleep, snoring is just the tip of the iceberg. It is the characteristic symptom of a more serious sleeping disorder that is known as sleep apnea. 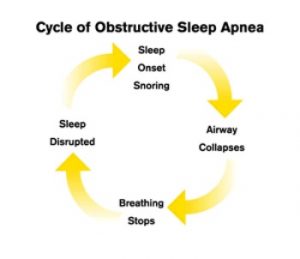 However, that term does not make any sense to us lay people. What does it have to do with snoring? What happens when you sleep if you have it? How can you tell that your snoring is due to sleep apnea? To better understand what sleep apnea is all about and how deadly it is, read on.

About 60 percent of everybody who snores has some degree of sleep apnea.

Snoring and having been witnessed to have pauses in breathing increases the likelihood of having sleep apnea to upwards of 80 percent.

Obstructive sleep apnea is caused when the muscles in the airway relax/collapse, preventing the sleeper from breathing until the sleeper arouses from the apnea.

Apneas can last more than a minute, and the associated arousals are disruptive to sleep (although it is rare for the sleeper to be aware of the apneas or arousals).

Someone with moderate sleep apnea will have 15 to 30 apneas in an hour.

Some people with severe sleep apnea can stop breathing more than 100 times an hour.

It’s important to identify and treat sleep apnea (which will eliminate snoring) not only to improve sleep quality, but because of the health risks associated with untreated sleep apnea.

Things like hypertension, stroke, diabetes, heart attack, atrial fibrillation and depression are just a few of the health risks that come with sleep apnea.

By now you probably have a clearer understanding of this sleeping disorder and what happens to your body when you are diagnosed with it. While we often associate snoring with adults, kids can snore too and likewise suffer from sleep apnea. And considering their young age and growing body, such a condition can have detrimental effects on their health and well-being.

A recent study set out to investigate the effect of sleep apnea on the brains of 7- to 11-year-olds. In total, 16 children with obstructive sleep apnea were evaluated at the University of Chicago‘s pediatric sleep laboratory. All children underwent neurocognitive tests and were scanned using MRI.

The study team was headed up by Dr. Leila Kheirandish-Gozal, director of pediatric clinical sleep research at the University of Chicago. The team worked in conjunction with researchers from the University of California at Los Angeles, who analyzed the images.

The test results and brain scans were compared with a further nine children without sleep apnea, matched for gender, age, weight, and ethnicity. They also compared the children with sleep apnea with a database of 191 MRI scans in a pre-existing National Institutes of Health (NIH) database.

Once the analysis was complete, the results were striking. The children with obstructive sleep apnea had substantial reductions in the volume of gray matter – the information processing part of the brain.

It is a parent’s responsibility to ensure that young children get enough sleep as they grow up. A growing body not only needs proper diet, supplementation, and active play but enough sleep at night as well. And when in the unfortunate event that a young child already snores and suffers from sleep apnea, see a doctor right away to undergo a sleep test to get a diagnosis.

Kids may have a hard time complying with a CPAP treatment. Even adults struggle with it too. But knowing how breathing is affected during sleep by this sleep disorder, it is important to take action right away or put their health and life at risk. Not all the time surgery is warranted to really beat sleep apnea. Check this out https://snoringmouthpiecereview.org/zquiet because it is an anti-snoring mouthpiece that children can conveniently use. Or, try a similar solution with this alternative mouthpiece: https://snoringmouthpiecereview.org/snorerx. Kids can manage to sleep soundly at night with these mouthpieces in place, unlike other sleep apnea managements that are not quite kid-friendly.

If you’ve ever wondered how those mouthpieces work and if they’re even worth it, read on. Living with a snorer, or being the snorer others have to live with, isn’t the best past time around. Many people snore for various health

reasons and due to participating in other not-so-healthy activities right before bed. Instead of ignoring the problem it’s important to identify the cause and deal with it before you get kicked out of your bed. Depending on the cause of the snoring you may need to consider investing in a mouthpiece. There are several on the market but some recent changes to one of our favorites, SnoreRX, is sure to raise some eyebrows:

Apnea Sciences, the manufacturer of SnoreRx, has announced a new improved design to its popular “stop snoring” mouthpiece, SnoreRx.

The changes in SnoreRx were brought about due to an ongoing effort to improve the user experience where customer suggestions were heard and acted upon.

New upgraded features were designed to resolve three of the most common issues reported by customers which include:

More details for SnoreRx can be found here, www.snorerx.com.

SnoreRx remains the only non-prescriptive oral appliance that meets and exceeds established medical standards set by Medicare and is approved by the FDA.

One of its flagship features include a built in calibrator allowing the user the ability to reset the mouthpiece adjustment to provide maximum effectiveness and comfort whenever needed. The adjustment moves in 1 mm increments, or what’s called Jaw Advancement Calibration.  SnoreRx does not produce constant pressure or torsion which can lead to pain and tendinitis.

Jeff Rafael, a senior SnoreRx affiliate, had this to say:

“The concept behind SnoreRx is not new, however the design is.  They have taken all aspects of this type of device to a much higher level.  Making the new upgrades has addressed many of the most common issues reported by customers.

If a person is a candidate to wear a stop snoring mouthpiece, I believe SnoreRx is now by far the safest, most effective and affordable solution to cure their snoring problem, period.

I love that it’s 100% made in the US, it adjusts, and is loaded with a ton of great safety and comfort features to get a great night’s sleep.  I use it personally and I know how wonderful it is.

One of the major concerns users had was with the size of the SnoreRX so the company responded in kind. Released just last year the improvements to the mouthpiece are already being lauded by users. The company kept the features users have become used to and worked on making it sleeker an more comfortable. This is a great example of a company being told that something isn’t working and then going ahead to do the best they can to make it better for their customers. Not many corporations tend to care about what their users think and those are the ones you will find who produce cheap, and grossly ineffective, products that they try to foist off on users.

With its precise calibrations to make it easy to customize and use the SnoreRx is definitely worth the $99 you’d ave to spend in order to get it. Sometimes you need to consider the value over the quantity of the money you are spending. This is one of those instances where slightly expensive comes with a great payoff that cheap just can’t give you.