When you become a parent, there are so many things that are thrown at you, literally or figuratively, that it can be hard to navigate. You’ve got advice from friends, family and the internet to consider. There are books you can read and movies you can watch. Until you actually experience being a parent yourself, it’s hard to imagine how you will react to things. The first time the baby 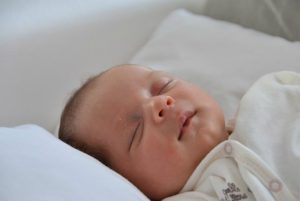 sleeps in their own room can be unnerving for parents. Many parents have been opting for video monitors these days because they can actually see their kid on the screen and know exactly what they’re doing and how they’re sleeping. An engineering team in India has taken this a step further, however:

When Ranjana Nair, Sanchi Poovaya and Aardra Kannan saw a friend’s prematurely born child two years ago, they were shocked at the amount of electronic equipment hooked up to her tiny body. But even after their friend was able to bring her baby home, the anxiety persisted. Constantly concerned, she kept going to the crib to put her hand on the child’s chest to make sure she was breathing. There are respiratory trackers for infants, but most of them require putting some kind of battery-powered sensor on the baby’s body, which is a concern for many parents. Nair, Poovaya and Kannan — all engineering graduates — thought there had to be a better way. And so the Raybaby was born.

At first glance, Raybaby looks like an ordinary baby monitor. It has a camera that detects the baby’s movements and transmits what’s going on to an app on the parent’s phone. But what’s special about the Raybaby is that it utilizes ultrawideband radar technology, which works much like ultrasound.

Within a range of five meters, it can detect the tiniest movement — less than a millimeter, even. So it’s not a problem if your baby is wrapped up in a blanket and hard to see on camera. The device is smart enough to know if the movement is related to breathing or if it’s just the baby kicking around. “Keep it on the table, bookshelf, anywhere next to the baby,” said Nair, who’s now the CEO of Ray, the company behind the Raybaby. All told, Nair claims an accuracy of 98.3 percent.

When paired with the app, Raybaby can give you valuable stats on your child’s live respiratory rate. It offers mapping of the different sleep states too. It also provides a weekly graph, which would be good information to have when you’re visiting your pediatrician. The device also alerts you if there are any sudden changes, which could point to a fever or other illness.

As a baby monitor, Raybaby doesn’t stream live video continuously to the app — which could tax your bandwidth — but instead tracks when the baby is awake or smiling or trying to stand up. It collects a collage of all of those moments into highlights of the day, which you can then share with the built-in online community that comes with the app. “They get the best of two worlds: vital monitoring and video monitoring all in one device, all of which is securely stored using Amazon Cloud Services,” said Poovaya, who is now Ray’s COO.

The device itself is an adorable little thing that’s small enough to blend into your nursery’s decor. Its components are clinically tested and FDA approved, and according to Nair, the results are so good that they’re comparable to the sleep-study equipment used in hospitals. Indeed, Johnson & Johnson Innovations, which is one of Ray’s investors, has used it in several sleep-study trials with great success.

For worried parents the world over this can seem like a godsend. It helps alleviate some of that new-parent fear and even bring peace of mind to parents who have been doing this for years. Consider the fact that you have a child home sick and you can’t be in their room the entire time. We all know with sick kids anything can happen and by having this monitor in the room which will also alert you to sudden changes, all parents can rest a bit easier.