Newborns sleep almost all the time. Toddlers and kids still sleep longer than adults too because of their developing brains and bodies. But over time, sleeping hours of a person lessens until adulthood where responsibilities are plenty but lacking on sleep and rest. Our sleeping patterns also change with aging. Older people find it harder to sleep as they age and often wake up during the night or in the wee hours of the morning. Things like smart phones, tablets and laptops shoot blue light at us for hours, which also may affect our natural ability to catch some snoozes. 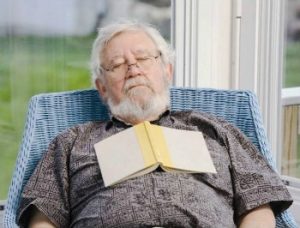 The elderly are often known as light sleepers with an average of 6.5 hours sleep at night. Many of them will likely benefit from more sleep if they read our ZQuiet review. Their sleep is often devoid of dreams and lacking in deep sleep that is the best part of sleeping in terms of quality and the health benefits you can get from it. Nocturia or excessive urination at night are also common problems experienced by older adults that have a big impact on the quantity and quality of their sleep.

It is generally accepted that people in middle age and beyond sleep about 1 hour less due to biological changes (not because they are super busy). The 1-hour sleep loss is considered natural and not unhealthy, says Judith E. Carroll, a psychiatrist who researches neuroscience and human behavior at the University of California, Los Angeles.

However, restorative sleep tends to decline with age. “The important point is that the overall need for quality sleep — deep sleep — is thought to remain, even though it is increasingly hard to get as the body ages,” Carroll says.

Sleeping does a lot of strange things to the body, especially for the younger generations. Unfortunately, the elderly don’t get to enjoy sleep as much as the younger ones even though they have more time on their hands now that they’re retired or out of work.

“Sleep changes with aging, but it doesn’t just change with aging; it can also start to explain aging itself,” says review co-author Matthew Walker, who leads the Sleep and Neuroimaging Laboratory at the University of California, Berkeley. “Every one of the major diseases that are killing us in first-world nations – from diabetes to obesity to Alzheimer’s disease to cancer – all of those things now have strong causal links to a lack of sleep. And all of those diseases significantly increase in likelihood the older that we get, and especially in dementia.”

Older adults’ sleep loss isn’t due to a busy schedule or simply needing less sleep. As the brain ages, neurons and circuits in the areas that regulate sleep slowly degrade, resulting in a decreased amount of non-REM sleep. Since non-REM deep sleep plays a key role in maintaining memory and cognition, that’s a problem. “There is a debate in the literature as to whether older adults need less sleep, or rather, older adults cannot generate the sleep that they nevertheless need. We discuss this debate at length in the review,” says Walker. “The evidence seems to favor one side – older adults do not have a reduced sleep need, but instead, an impaired ability to generate sleep. The elderly therefore suffer from an unmet sleep need.”

The elderly have gone through so much in life and all these changes both good and bad can wreak havoc with their sleep. Even the different medications they take can also mess with their sleeping patterns. However, sleeping less in your older age isn’t really a problem at all if you still feel refreshed and energized upon waking up. It simply means that your sleeping requirements have changed and you can make do with 6-7 hours of sleep now than you did in the past.

The elderly need to go see a health provider, though, if they suffer from other sleep-related disorders like insomnia or sleep apnea and the annoying snoring that accompanies it because their health will further deteriorate if these issues are not addressed. While surgery is no longer an option for conditions like this among older people because of the risks involved, there are still other solutions to address sleep apnea, for instance. Anti-snoring gadgets like the ZQuiet can offer relief as well as the SnoreRX that are non-invasive but addresses the problem especially the snoring and breathing pauses that may exacerbate other pre-existing health conditions.