When it comes to a jaw advancing snoring mouthpiece, it’s hard to beat ZQuiet. In fact, readers of the Snoring Mouthpiece Review consistently tell us that it is their

favorite snoring mouthpiece. The reasons are quite simple:

Probably about the only downside with ZQuiet for most people is that you have to order it directly. You simply cannot buy ZQuiet at Amazon, and get warranty and the kind of customer service you’re looking for. And while that may change in the future, the likelihood is very low.

One of the more interesting recent champions of the ZQuiet snoring device is a group of folks that actually consist of sporting champions! I am talking about, of 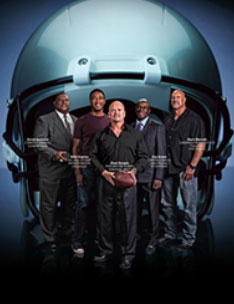 course, The Pro Player Health Alliance, or PPHA, a group of former professional athletes that are “focused on educating others about sleep apnea and sleep in an effort to reduce the number of deaths and adverse health conditions that result from untreated sleep disordered breathing”. So it’s an important goal, and one that these pro players understand considering how important good health has been to their careers. This is also not shocking because the ZQuiet is actually very similar in shape to sporting mouthpieces, which are of course used in most sports.

According to their recent release:

OSA sufferers stop breathing multiple times when they are asleep, resulting in lower night time oxygen levels and poor quality sleep. The loss of oxygen during the night combined with the lack of good sleep can be a dangerous combination. Stroke, high blood pressure, diabetes and heart disease have been linked to OSA.

The message is personal to many of the greats that make up the PPHA team, including Derek Kennard, who played with three teams – the Arizona Cardinals, the New Orleans Saints and the Dallas Cowboys – during his more than 11 years in the NFL.

“The loss of my brother to sleep apnea became a wake-up call for me. I was always tired and looked like it as well and knew I might be at risk. I had a home sleep test and learned that I stopped breathing many times during the night – sometimes for as long as 1 minute and 30 seconds. Treating my sleep apnea has changed my life – it is helping to keep me safe, healthier and living a better quality of life.”

The PPHA seems to have taken up sleep disordered breathing as a serious cause, and their walk certainly fits their walk:

To tackle these serious health issues and encourage others to make healthy sleep choices, the PPHA is committed to increasing awareness about sleep disordered breathing and offer guidance and recommended solutions that can lead to effective treatment.

Talking with a physician about potential sleep apnea or treating snoring is critical. OSA sufferers, especially middle-aged adults and men, have a 46% increased risk of death, from any cause, compared to those without the sleep condition, says the National Institute of Health. As many as 85% of people with OSA remain undiagnosed.

While snoring is typically a sign of OSA, not everyone that snores has OSA. Snoring affects about 45% of Americans on any given night, and according to Henry Ford Hospital “snoring is a bigger risk factor for stroke and heart attack than smoking, being overweight, or high cholesterol.”

PPHA members have experienced the best diagnostic methods, and have tested and utilized various solutions for sleep apnea and snoring. Now they are sharing this education and experience.

It’s fantastic forward thinking stuff, and something you don’t see that often from professional athletes. See the full post here…

So if you’re looking for a snoring mouthpiece, but are not 100% sure of what you should choose, take a look at the ZQuiet. This mouthpiece has been proven to work for over a half a million Americans, and that number grows every single year.